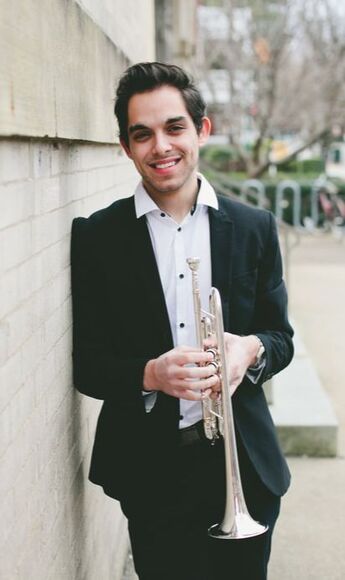 Haidar “Hamed” Barbarji (He/him/his) is a versatile trumpeter based in Richmond, Virginia. A graduate of Virginia Commonwealth University, Hamed’s former teachers include Rex Richardson, Brian Strawley, Taylor Barnett, David Vonderheide, and Paul Bhasin. For his 2019 fall semester, Hamed attended the Royal Conservatoire of Scotland, where he studied with Principal Trumpet of the BBC Scottish Orchestra, Mark O’Keeffe.
As a freelance musician, Hamed has performed with groups such as the Richmond and Williamsburg Symphony Orchestras, the Richmond Ballet, the Virginia Opera, the R4nd4zzo Big Band, the Bobby Blackhat Band, Chan Hall, Brunswick, and the Virginia Repertory Theatre. He has toured with many nationally-acclaimed bands, such as the No BS! Brass Band, In Layman Terms, and the Kat Wright Band. Since 2017, Hamed has been a soloist with the Virginia Commonwealth University and the Universidad de Cartagena symphony orchestras, a semi-finalist in the National Trumpet Competition, and has performed in Colombia, Italy, Switzerland, and Scotland.
Since 2016, Hamed has been a member of the blues band “In Layman Terms,” which signed with Endless Blues Records for their album “Strong Roots.” Since 2019, Hamed has also been a member of the Braeburn Brass Quintet, which was awarded a fellowship for the 2021 Aspen Music Festival.
​
​

​     Gregorios Papaefthymiou is a rising fourth-year undergraduate student at the University of Michigan in Ann Arbor, as well as a founding member of the Braeburn Brass Quintet. He is pursuing a Bachelor’s of Music in Trumpet Performance, and plans to pursue his Master’s. During his time as an undergraduate, he’s had the pleasure of performing as Principal Trumpet in the University Symphony Band, the University Philharmonic Orchestra, co-principal in the Michigan Pops Orchestra, and has substituted in the Ann Arbor Symphony.
Greg enjoys spending his free time listening to classical music among many other modern genres, and strives to someday play in a major orchestra. He would also like to contribute to video game and film scores, which have been a major influence on his decision to pursue music. 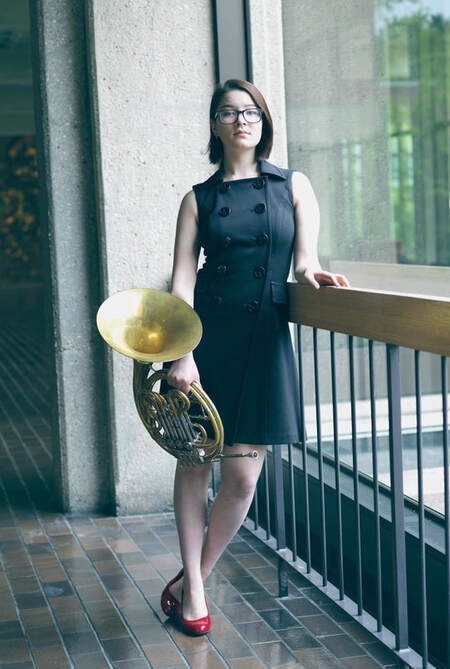 Momo (She/her/hers) finds her purpose through the creative discipline of music. She is an alumna of the Chicago Youth Symphony Orchestra, where she developed a love for both orchestral and chamber playing. She is currently pursuing her Bachelor's degree in Horn Performance at DePaul University. Momo mentors her younger peers, teaches a studio of beginning and intermediate level horn students, and has lectured at Northwestern University on the French Horn as an orchestral instrument through OLLIE. She delights in performing with local ensembles, and her freelancing has led her to performances with the Merit School of Music, Wheaton College, Elmhurst Symphony Orchestra and the Music of the Baroque. She has had the privilege of sharing the stage with such prolific musicians as Rachel Barton-Pine, Oto Carillo, William Buchman, Charlie Geyer and Barbara Butler, Itzhak Perlman, Cliff Colnot, Gerard Schwartz, Grant Cooper, Dr. Victor Yampolski, and Gennady Rozhdestvensky.

Off the orchestral stage, Momo is a member of the non-profit Achelois Collective, a female-centered chamber group missioned around social change in music. She has delivered multiple world premiere performances. She is also the horn player of the Braeburn Brass.

Momo’s other artistic outlet is painting. She is featured in private installations in 4 continents and enjoys working with her commissioners to create original, affordable art, including hand-designing posters for student recitals and cover art for several albums. She currently resides in Chicago, with her cat Pumpkin. ​ 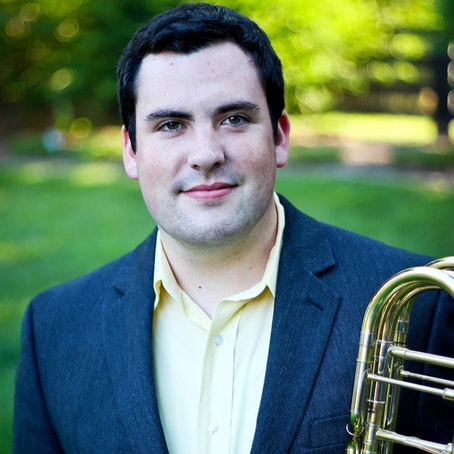 Appearing on soundtracks for Lost in Space, Destiny 2, and Call of Duty, Brian Entwistle (He/him/his) is a freelance bass trombonist and student in Chicago, Illinois. His experiences and skills extend all across the musical world, including solo performance, orchestral performances, jazz and commercial playing, and teaching.
As a freelancer, Brian has been a frequent recording artist with Nashville Music Scoring at the Ocean Way studio. He has recorded music for several video game and movie scores, as well as studio albums; other notable credits include Star Wars: Jedi Fallen Order (2019), Mass Effect: Andromeda (2017), and Evanescence’s studio album, Synthesis (2018). As a jazz artist, he has performed with the Nashville Jazz Orchestra, the Tennessee Jazz Collective, the Nashville Jazz Composer’s Collective, Tim Rushlow and his Big Band, and the Ryan Middagh Jazz Orchestra.
Brian has been a sub with various orchestras in the Southeast United States. He has performed with the Nashville Symphony Orchestra, the Huntsville Symphony Orchestra, the Louisville Orchestra, and the New World Symphony, under the baton of Michael
Tilson Thomas. He has also performed with the National Repertory Orchestra.
As a soloist, Brian has been a finalist for several competitions, including the American Trombone Workshop National Solo Competition, the International Trombone Association’s George Roberts Competition, the ITA’s Donald Yaxley Competition, and the ITA’s Ed Kleinhammer Excerpt Competition. He has also appeared as a guest soloist with the University of Oklahoma Trombone Choir.
He holds a degree from Vanderbilt University (BM 2016). His primary teachers have been Charlie Vernon, Mark Fisher, Jeremy Wilson, and Gerald Felker. ​ 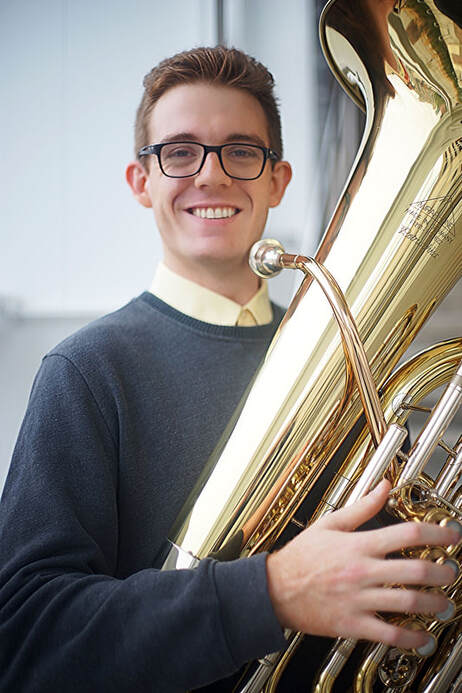 ​ Wiatt Cariveau (he/him, b. 1995) is a multifaceted performer, educator, and marketer based in Iowa City, Iowa. A passionate educator, Wiatt serves as Artist Instructor of Low Brass at Cornell College. He is in demand as an instructor in the area, having given masterclasses and clinics at various schools in the state, with students advancing to All-State and honor bands.
Onstage, his recitals feature accessible and exciting works from various genres with a particular focus on electronic and chamber music. In addition to the Braeburn Brass, he performs with a traditional jazz band, brass funk/pop group Brass Tower, and pandemic free improv duo Six Beats Apart.
His accolades include 2021 Aspen Music Festival Brass Quintet fellow, 2-time University of Iowa Concerto Competition Finalist, featured guest at the 2020 Virtual Atlantic Brass Quintet Seminar with the Braeburn Brass, and Semifinalist in the 2019 International Tuba Euphonium Conference Electronics Competition.
Wiatt Cariveau earned his undergraduate and master’s degrees from the University of Iowa and is a proud student of John Manning. While at the Aspen Music Festival, Wiatt studied with John Rojak and Warren Deck.